Trondheim - The first capital of Norway

Situated in the county of Sør-Trøndelag where the river Nid flows into the Trondheim fjord, one must admit Trondheim is pretty far north, in fact only 500 km from the Polar Circle, but the warm Gulf Stream blesses the city with a fairly mild climate.

The name Trondheim derives from the old Norse Þróndheimr, meaning home of the strong and fertile ones.

First Capital of Norway
The city was founded by Viking King Olav Tryggvason in 997 BC, and occupies a special place in Norwegian culture and history. Trondheim was the nation's first capital, and continues to be the coronation city where Norway's Kings from Harald Hårfagre (10th century BC) to King Harald V (1991 -) have been crowned and blessed. In its history the city was and is now again a popular destination for pilgrimages. Trondheim is also an ecclesiastical centre, a regional capital, a centre for industry and commerce, and an important education and research centre.

When you visit Trondheim, you will notice: 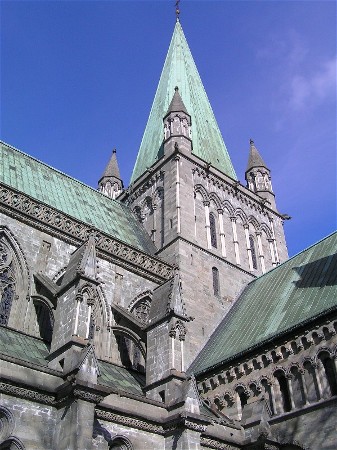 Characteristic wooden architecture
After a catastrophic fire in 1681 destroyed most of the houses in the city, Major Jean Caspar de Cicignon was brought to Trondheim (from Luxembourg) to design a new city plan in the Baroque style. The streets were made wide to prevent fires from spreading. Some of the narrow alleys and narrow streets, many originating in the Middle Ages, nevertheless still exist, contrasting with Cicignon's wide boulevards from the 1600s. Even today Trondheim is spoken of as one of the typical wooden cities of Europe, and the city centre has many special wooden buildings, some built as far back as the 1700s.

Capital of Technology
Trondheim has a strong position as the centre of trade for central Norway. It has around 50 per cent of the regional retail trade and about 85 per cent of the wholesale trade, 85 per cent of imports and 65 per cent of exports. NTNU (the Norwegian University of Science and Technology), Trondheim's internationally renowned university, and the city's many research communities ensure that it is a city of innovation and development of science, business and industry ventures.  Trondheim is truly the nation's technological capital.

Every sixth inhabitant a student
In 2006 Trondheim is home to around 165 000 inhabitants. But if one counts the large number of students (every sixth inhabitant is a student) the population swells to 180 000. The students adds a youthful exuberance to this thousand-year old city. While it is not a large metropolis, Trondheim's location and opportunities put it on an equal footing with the major cities of Europe.

Cultural life
Trondheim has a rich cultural life with an international flavour. Every year at the end of July and start of August the city celebrates St. Olavs Festival, a popular church and cultural festival drawing crowds from near and far.